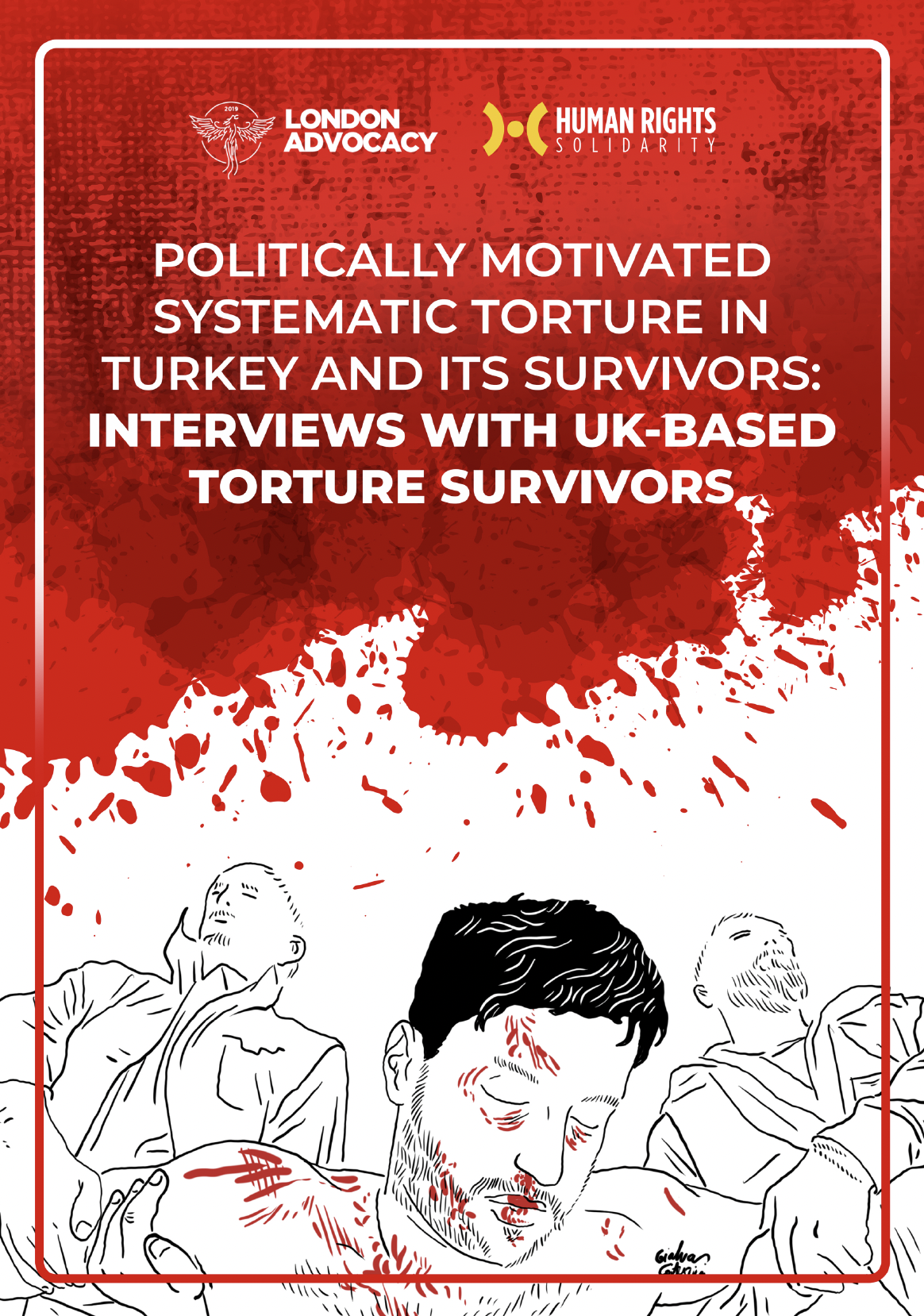 Human Rights Solidarity (HRS) is a London-based agile and independent human rights organisation empowered by youth. We define ourselves, not with the injustices and human rights abuses we fight against but with the future, we want to build. Our hard work is determined by the desire to protect the rights of the generations to come. https://www.hrsolidarity.org/about-us/

Human rights violations, specifically torture and inhuman or degrading treatment (TIDT), have always been rife in Turkish society; however, since the July 2016 coup d’état attempt against the government of President Erdoğan, these instances of TIDT have increased significantly. As a result, a striking number of Turkish citizens have been documented fleeing their homelands due to fear of prosecution and TIDT, many of whom have settled in the UK and the EU. The report on Politically Motivated Systemic Torture in Turkey and Its Survivors by London Advocacy and HRS analyses the international and national legal frameworks of TIDT with support from recent documentation of torture and inhuman treatment in Turkey in order to put forward London Advocacy’s Torture or Inhumane or Degrading Treatment Victims Support Project.

The victim support project gathered information through a questionnaire to 30 victims of torture and additional interviews with 10 of the 30 original participants. By demonstrating the United Nations General Assembly prohibition against torture, the 1966 International Covenant on Civil and Political Rights, the 1984 Convention against Torture, the 1989 Convention of the Rights of the Child, and many more’s declarations and commitment to battling the existence of torture, this report frames the lack of aid and expulsion of torture in Turkey in a legal environment.

Examples of recent torture and inhuman treatment reports in Turkey further exemplify the existence of this human rights issue and back up London Advocacy’s move to create a victim support project to raise awareness of the injustices and violations occurring in Turkey. The outcome and findings of the victim support project align with multiple previous documentation of TIDT in Turkey, directly overlapping with the CPT’s Turkey 2017 and 2019 reports.

Main Findings
• The Torture Victims project functions as a research project to document and analyse the torture and inhumane or degrading treatment cases evidenced by newly arrived Turkish refugees in the UK after the 2016 coup.
• Since 2016, those perceived as Gülenist and Kurdish are at high risk of accusations of terrorism-related charges, and hence torture and inhumane treatment.
• All interviewees detailed overcrowding, lack of sufficient beds in police detention cells and prisons, ineffective legal aid, and insufficient access to food and water.
• The majority of interviewees reported being detained and tortured by police multiple times.
• Turkey is a party to ICCPR, the 1984 UN Convention against Torture, the 1989 Convention on the Rights of the Child, the 1950 European Convention for the Protection of Human Rights and Fundamental Freedoms, and the 1987 European Convention for the Prevention of Torture and Inhumane or Degrading Treatment or Punishment, yet torture in Turkey continuously goes unpunished.
• Torture incidents are not being accurately investigated.
• The accounts of the interviewees overlap with previously reported cases of TIDT in international documents and national entities (see Ankara Bar and Medical Association and CPT 2017 and 2019 Turkey reports)
• Between June 2016 and June 2022, over 5100 individuals have applied for asylum in the UK from Turkey, with an additional approximation of 110,000 individuals applying for asylum in the EU between 2016 and 2021.
• Several victims who were encouraged to fill out the short survey during seminars did not and did not respond to our calls for face-to-face interviews due to anxiety over repercussions from the Turkish government. 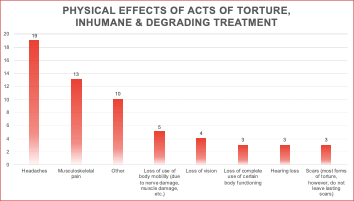 A Sample Table from Report: Physical Effects of Torture, Inhumane and Degrading Treatment

Please download the full report from the left panel of this page.

London Advocacy will continue to value communication with our stakeholders, including readers of the report. If you have any inquiries regarding the contents of the report, please contact us at info@londonadvocacy.org. 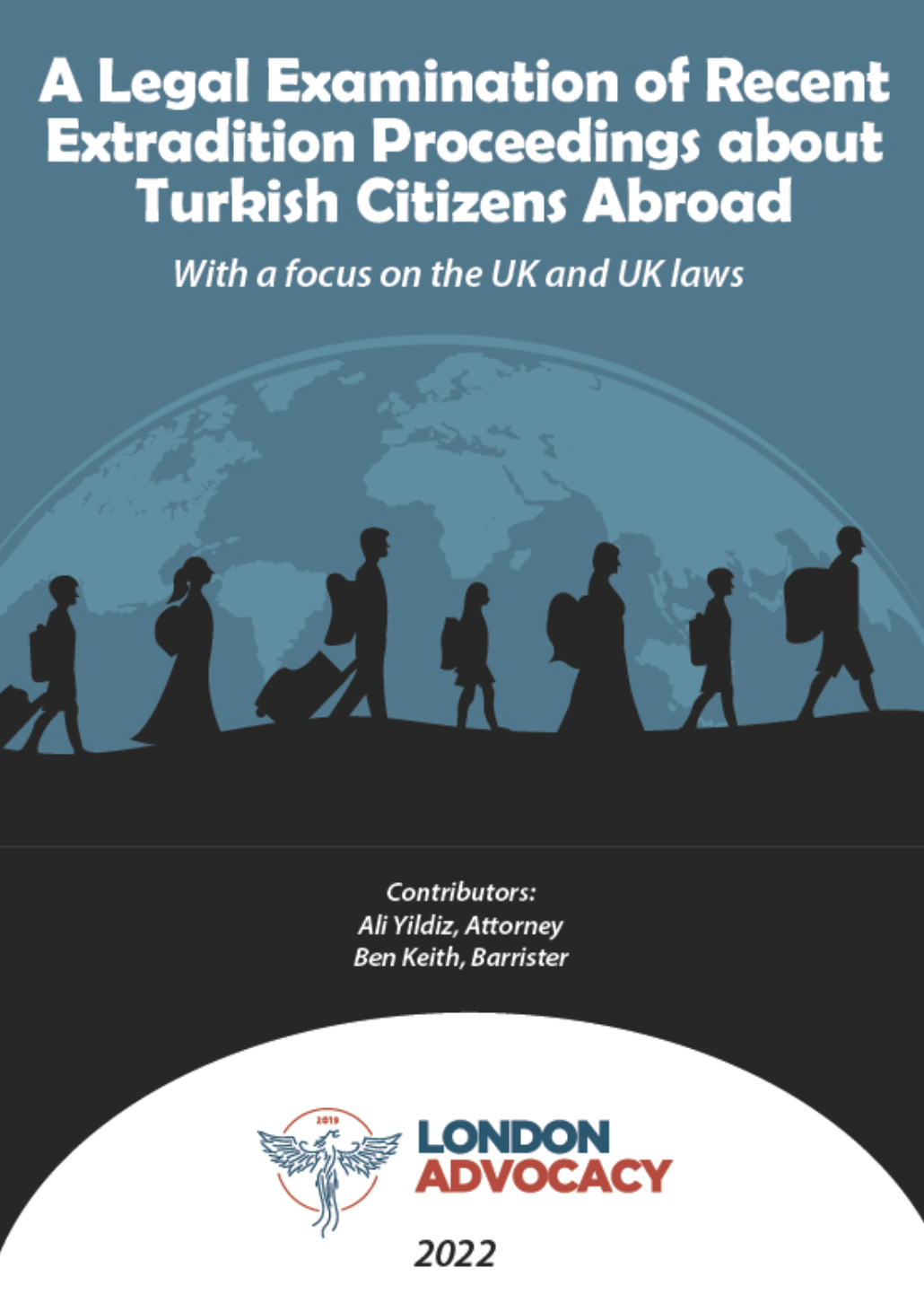 In recent years, actions of transnational repression of authoritarian regimes ramped up. Abuse of the extradition mechanism is one of the tools deployed for this purpose.

Turkey is one of those countries. In so much that since 2016 Turkey has sent at least 1133 extradition requests to 110 countries. Of those, 202 were sent to the United States and 361 to European Union countries.

Although the majority of countries have not referred these requests to their judicial authorities, the United Kingdom is one of the couple of countries which did certify the requests for a judicial proceeding.

LA believes that a report to help victims of the Turkish government’s transnational repression policies and their lawyers is immediately needed. We, therefore, with the help of experts prepared a report that while keeping our scope limited with the extradition matters in the UK, we seek to evaluate whether the extradition of individuals would be legal under the UK and international law; examining whether individuals would have the right to a fair trial and defence and whether they would have any safeguards against torture or ill-treatment.


Please download the full report from the left panel of this page.

London Advocacy will continue to value communication with our stakeholders, including readers of the report. If you have any inquiries regarding the contents of the report, please contact us at info@londonadvocacy.org.

Either preventive justice, or change through litigation